Friday Finds is a weekly bookish meme, hosted by MizB of Should Be Reading to showcase books you recently found and added to your TBR (to be read) list. It doesn’t matter whether you found them free online, borrowed them from a library or purchased them. Anything and everything works.

Eleven books made it into my home this month. The one I am most excited about is non-fiction (an unusual occurrence for me). 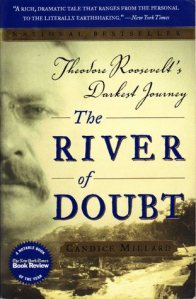 The River of Doubt–it is a black, uncharted tributary of the Amazon that snakes through one of the most treacherous jungles in the world.

. . . . . Theodore Roosevelt set his sights on the most punishing physical challenge he could find, the first descent of an unmapped, rapids-choked tributary of the Amazon. Together with his son Kermit and Brazil’s most famous explorer, Candido Mariano da Silva Rondon, Roosevelt accomplished a feat so great that many at the time refused to believe it. In the process, he changed the map of the Western Hemisphere forever. Along the way, Roosevelt and his men faced an unbelievable series of hardships, losing their canoes and supplies to punishing whitewater rapids, and enduring starvation, Indian attack, disease, drowning, and a murder within their own ranks.

Theodore Roosevelt’s own account of this journey in Through the Brazilian Wilderness is available free from Project Gutenberg.

The other ten books are all series mysteries:

Tempt us with your Friday Finds! Miz B is on a holiday break, but you can  leave a comment with the link to your own Friday Finds post below. If you don’t have a blog, you may share your finds in a comment here anyway. We’d love to know what you found this week.