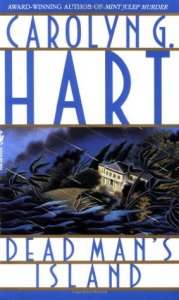 I don’t consider myself an angel, avenging or otherwise, but I can’t always accept fate as the answer. Timing makes all the difference.

There exists a rather charming school of thought that the motorist who looms out of the fog at precisely the right moment or the fatherly old man who takes a lost child’s hand and leads her to safety are heaven-sent messengers.

Unknown to themselves, of course.

The young woman he recalled was almost lost in the mists of memory, and those partaicular memories I had no intention of resurrecting. The reckless young reporter whom Chase had known so well was now a woman who had spent five decades covering fires, disasters, wars, revolutions, murders, and public scandals.

I read a number of Carolyn Hart’s Death on Demand series years ago, but have only discovered the delightful Henrie O. It looks like there are seven in the series. Have you read any of Hart’s books?