Friday Finds is a weekly bookish meme, hosted by MizB of Should Be Reading to showcase books you recently found and added to your TBR (to be read) list. It doesn’t matter whether you found them free online, borrowed them from a library or purchased them. Anything and everything works.

This book was brought to my attention a few weeks ago when Mike nominated it as a group read at the Yahoo French Literature group and arrived earlier this week. The read and discussion will take place in October. Anyone interested is welcome to join us. We’d love to have you.

I was unable to find a cover image for the particular edition I have, so chose another by the same translator. 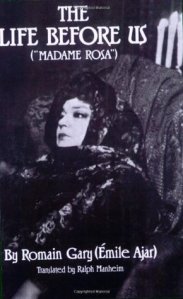 Several readers I know are fans of Romain Gary’s books. Emma at Book Around The Corner has a page devoted to him. She wrote the following of the next book: “Back in February, when I prepared the fourth Wednesday with Romain Gary post, I felt the urge to reread Lady L and I wasn’t disappointed.” This persuaded me to add Lady L to my book order.

This book was originally written in English which confused me until reading at Emma’s site that Gary’s first wife was British writer Lesley Blanch. 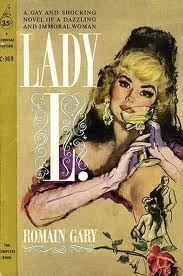 Both these books have been made into movies. La Vie devant soi, which won the Prix Goncourt the year it was published, was made into a movie titled Madame Rosa starring Simone Signoret. The movie of Lady L retained the book title and starred Sophia Loren, Paul Newman and David Niven.

Did you make any fabulous discoveries this week? Share your Friday Finds with us! Please leave a comment with the link to your own Friday Finds post on MizB’s blog or here. If you don’t have a blog, you may share your finds in a comment here anyway. We’d love to know what you found this week.